During the war in 1942, there was a nationwide movement to recognize "Blue Star" mothers, those who had sons in the dreaded conflict. Citizens Bank, precursor to Seacoast, always being community oriented, offered a token of loyalty and respect to families with servicemen in the military forces. 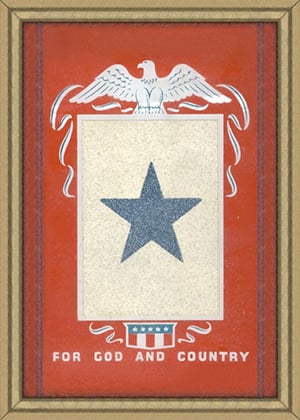 The attractive, patriotic emblem in a gold 4-inch by 5-inch metal frame consisted of an image of a blue star embedded in a surrounding white rectangle on red background with an eagle perched above and the words “God and Country” printed below, all protected under glass. A string cord was looped through slots on the back, allowing it to be easily hung on a wall or displayed in a window.

An example of this memento token can be seen at Stuart Heritage Museum on Flagler Avenue.

A retired general from the Army moved to Stuart and suggested that the bank giveaway red flags with blue stars to mothers with sons in the military. If their son was killed in the war, the blue star was replaced with a gold star. The bank gave these small flags away for a few years.

Citizens Bank, precursor to Seacoast, always being community oriented, offered a token of loyalty and respect to symbolize this effort for families with servicemen in the military forces. In the photo are the words that were on the back.