Data Can Tell a Different Story About Women in Business

Thinking back to just a few decades ago, it’s easy to look at the current number of female CEOs or powerful women in business who are hitting the lecture circuits and imagine the glass ceiling has finally shattered – or at least severely cracked. But what do the data and statistics about women in business have to say? Have we really extended the corporate ladder for all and closed the gender gap?

In honor of upcoming Orlando Journal 2020 Women Who Mean Business events – and women in leadership everywhere – we decided to analyze the data to see what it reveals. Here’s what we found. 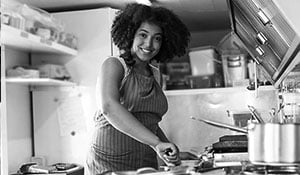 From 2007 to 2018, the total revenue of women-owned businesses climbed 46%. This is 10% higher than all businesses put together, an impressive feat seeing that the majority of businesses (60%) are not owned by women.

When you dive a little deeper into the data, it’s also exciting to note that the number of scientific, technical and professional service firms owned by women rose from 1.4 million in 2014 to 1.6 million in 2019, outpacing the overall business growth rate, despite the historic lack of STEM (science, technology, engineering and math) education women receive.

Social and healthcare businesses owned by women also grew – from 1.7 million in 2014 to 1.9 million in 2019. In fact, despite generally generating less revenue, healthcare, tech, science and professional services all fall within two of the three most popular industries for women-owned businesses. By addressing gender parity and delivering better access to STEM education for young girls, perhaps revenue could one day equal the popularity of these industries for female entrepreneurs.

The good news for women in business continues as we move into corporate America. As of 2019, 44% of companies report having three or more women in their C-suite positions, a welcome rise from the 29% of companies in 2015. Still, this amounts to only 1 in 5 C-suite executives being a woman and 1 in 25 being a woman of color – a far cry from the encouraging entrepreneurial stats for women of color.

Thankfully, female CEOs and CFOs are making the case for more women in C-suite positions. A recent study found that firms who have a female CFO are more profitable in general, and they generated excess profits of $1.8 trillion over the course of the study.

Not to be outdone by their financial counterparts, in the two years following their appointment, female CEOs oversaw a 20% increase in stock price momentum. During that same time allotment, female CFOs saw a 6% increase in profitability and 8% larger stock returns. Overall, firms that hire female CEOs and CFOs outperform the market average in terms of stock price performance.

This isn’t just some anomaly. An extensive linguistics analysis was performed on the biographies of executives, extracting individual features associated with success such as education, achievements or personal traits. The study found that the language used to describe all female executives was the same as the language used to describe the most successful male executives. This shows that success is driven by common attributes for both genders, despite the level of realization in the real world, which can be influenced by gender bias. What’s more is these “success” attributes that correlated with the most successful male executives were found far more often in female executives.

The results suggest that female executives gained such superior results – as with the female CEOs and CFOs above – partially because they are held to a higher standard. With this kind of emerging data and statistics about women in business, smart decision-makers should see that the number of women in C-suite leadership positions continue to rise for increases in both social and financial equity.

While the business world waits for this data about the benefits of women in leadership to disseminate, human resource professionals should pay attention to data showing the types of problems that need to be addressed in the overall structure of a business so that every woman has an equal shot at success and promotion as their male counterparts.

One of the most widespread problems, often described as “the broken rung on the corporate ladder,” comes early on in the quest for upward mobility. Now five years into their “Women in the Workplace” study, McKinsey & Company reports that for every 100 males who receive a promotion and are hired as a manager, only 72 women achieve the same.

This “broken rung” leaves female employees stuck with entry-level jobs earning entry-level pay – which is often far less than their male counterparts’ (even in 2019, women earned just $0.79 for every dollar men made). The result is 62% of manager-level positions are held by men – just 38% by women. As you can imagine, when higher-ups are peering into this talent pool for executives, even if they pick a manager at random, they are more likely to promote men to even higher positions in the company thanks to the disproportionate numbers.

This type of bias also leads to misconceptions throughout businesses and the corporate world at large. For example, one statistic about women in business that seems promising is the 87% of companies that are highly committed to gender diversity, up from just 56% in 2012.

That’s a wonderful leap. But when you compare it to the fact that only 50% of their employees think gender diversity is a high priority for their company – a statistic that hasn’t changed for the entire five years of the McKinsey & Company study – we start to see how disheartening the realities are for women looking up at the glass ceiling as compared to the intentions from those looking down.

Why Business’s Gender Diversity Problem Needs to Be Fixed Now

These problems are not new, but they are getting enhanced attention thanks to the media, events organized by women in leadership as well as corporate and grassroots programs alike. If the progressive arc of time and social movements can’t chip away at the gender diversity and pay gap problems alone, perhaps modern solutions like data and statistics can move politicians and decision-makers to solve the outdated problem of gender gaps in the workplace.

Consider the McKinsey & Company study’s broken rung findings, which state that if businesses promote and hire women to first-level manager at the same rates as men, corporate America will add 1 million more women to management over the next five years. Why is this important?

Because it is extensively understood by worldwide economic policy think tanks and organizations like the United Nations that if the United States (55%) could match the female employment rate of Sweden (76%), America could boost its GDP by $1.8 billion – a 9% increase. If all 36 countries in the Organization for Economic Co-operation and Development (OECD) were to match Sweden, the collective GDP boost would be $6 trillion.

And if America could close the gender wage gap? A 22% increase in earnings for women, resulting in $816.1 billion increase in women’s wages and providing an almost unheard of boost to the economy.

But perhaps the best reason to fix the broken rung and close the gender gap in hiring, pay and promotion is that 86% of women say that when they see more women in leadership, they are encouraged that they can get there themselves one day. And that’s our major takeaway from looking into statistics on women in business – the more we understand why things are happening, the easier it becomes to start fixing the problems and the easier it becomes for us as a bank to offer our own resources for Florida women in business.

At Seacoast Bank, we’re here to help. If you have questions about the financial side of your business or want to know more about solutions we offer for business banking, contact your local banker today.