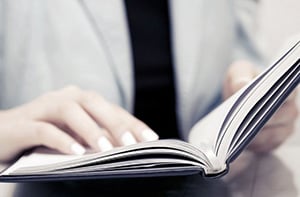 graduated from Wheaton College, wanted answers to one question: What business books should aspiring business leaders be reading? They wrote letters to each Fortune 500 CEO asking for their book recommendations, and were stunned to hear from more than 150 CEOs.

Below are the top 52 books recommended by today's leading business minds (in order of number of recommendations):

1. Good to Great by Jim Collins

3. Great by Choice by Jim Collins

4. The Outsiders by William Thorndike

6. Built to Last by Jim Collins

7. The Effective Executive by Peter Drucker

8. Team of Rivals: The Political Genius of Abraham Lincoln by Doris Kearns Goodwin

9. The Speed of Trust by Stephen Covey

10. The Advantage by Patrick Lencioni

11. The Bible by Multiple

13. The Innovators by Walter Isaacson

15. In Search of Excellence by Tom Peters

17. The Leadership Pipeline by Ram Charan

19. Leadership Is an Art by Max DePree

22. Our Iceberg Is Melting by John Kotter

24. The Five Temptations of a CEO by Patrick Lencioni

27. Lincoln on Leadership by Donald Phillips

31. Getting to Yes by Roger Fisher and William Ury

34. Five Dysfunctions of a Team by Patrick Lencioni

35. The Strategist CEO by Michel Robert

36. The Big Short by Michael Lewis

37. The Will to Manage by Marvin Bower

40. How the Mighty Fall by Jim Collins

42. The Goal by Eliyahu Goldratt

43. The Power of Many by Margaret C. Whitman

44. Taking People With You by David Novak

45. Switch by Chip and Dan Heath

46. Made to Stick by Chip and Dan Heath

47. The Power of Habit by Charles Duhigg

48. Barbarians at the Gate by Bryan Burrough

49. Only the Paranoid Survive by Andy Grove

50. The Wealth of Nations by Adam Smith

51. Give and Take by Adam Grant

Would you like to continue learning and growing from local professionals and experts in a variety of fields that are pivotal to the success of your business? Learn more about Seacoast Bank's advisor network or check out our small business banking solutions.

Better By All Accounts.