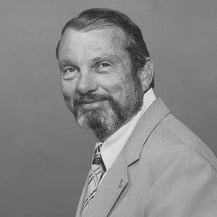 “My father gave us the character and values that define our team and our purpose at Seacoast Bank,” said Denny S. Hudson, III. “Putting customers first, investing in the community, taking care of our associates – all of this is who he was and how he felt a bank should conduct business. It’s difficult to express how much his legacy means to the bank. It’s impossible for me to tell you how much we’ll miss him.”

Cork took over as chairman of the bank in 1969 after the passing of his father, Dennis S. Hudson, Sr. at a time when the bank had less than $100 million in assets. When he stepped down as chairman and CEO in 1992, the bank had nearly $1 billion in assets. For much of Cork’s career, Seacoast had but one office and was the only bank operating in Stuart. Over time, the bank expanded across Florida and assets grew to more than $7 billion.

Cork led the bank through multiple recessions and the stagflation era of the 1970s. In addition to weathering challenges, he and his brother Dale, who served as vice chairman, now retired, championed innovation and technology and led Seacoast to be the first on the Treasure Coast to introduce the drive-thru window and the personal automated teller (PAT). Under his leadership, the bank was one of the first to take advantage of a change in state banking laws that allowed for “branching” when it opened its second location in Jensen Beach in 1977. Seacoast currently has 50 branches statewide.

Cork was a leader not only of the bank, but of the banking industry having served as a member of the board of directors of the Federal Reserve Bank of Atlanta Miami Branch and the Florida Bankers Association. He also served in a variety of leadership positions in the local community during his lifetime including chairman of the Red Cross of Martin County, president of the Rotary Club of Stuart, director of Hospice of Martin County and many others.

“I knew Cork for 86 years. I met him when his family moved to Stuart to open the bank,” said Evans Crary, Jr., founder of the Crary Buchanan law firm. “He was an excellent banker, good friend, and it’s a real loss to the community with his passing. We were frat brothers, roommates in college, we flew airplanes, fished and sailed together. It was a wonderful friendship and he was a dear friend.”

“He was such a gentleman besides being all the things to the community he was unassuming and so humble,” said local historian, Sandra Thurlow. “He would often send flowers accompanied by lovely notes to people in the community who he felt needed a lift.”

Cork’s wife, Anne Hudson, passed away in 2010. He is survived by his brother Dale, and his children, Dennis S. Hudson, III, Dana L. Houck, Suzanne M. Beeker and Andrew B. Hudson as well as 12 grandchildren and five great-grandchildren.

A Guide to VA Home Loans