March served a great reflection on Women’s History Month honoring the path women have traveled to get to where we are today, but throughout the month of April we’re looking forward to the future of strong women in business, so let’s continue the conversation about the importance of women in leadership roles.

Join us as we discuss female leadership roles in businesses and communities, tips on how businesswomen can pull ahead in the workplace and business ownership, interesting facts and statistics about businesswomen and leaders, and how women can step up within their industries and lead a new appreciation of female-driven business.

What Women in Leadership Can Do For Your Company
Earlier this year a report from The Peterson Institute for International Economics asserted that when a company employs women in leadership positions it can expect an increase in profitability. Other studies on the subject came to similar conclusions.

According to a newly released analysis of 87 independent studies from over 20 countries, these finding hold true for corporations with women on the boards of directors—as long as their input is taken seriously.

But why do women in leadership roles give companies a boost in their social conscience? 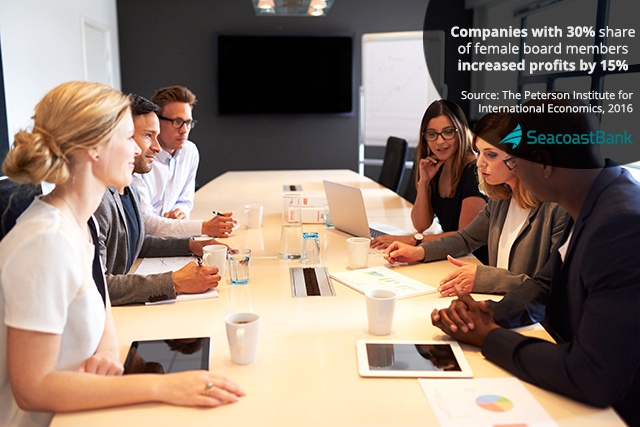 Lehigh University professor Corinne Post and Georgia State professor Kris Byron – who authored this latest paper on the topic – have found that the answer to that question is the differences women bring in terms of perspective, education and style of conduct.

“There’s extensive research that shows that men and women have different values and that women tend to be more holistic, think more broadly, be more attuned to environmental and social concerns,” says Post. “So when there’s a discussion in the boardroom, those views – thinking about the implications for the communities we work in, what are the implications for employees – might be more likely to be voiced because you have those perspectives on the board.”

Why women tend to be more in tune with certain issues is debatable, and not covered by Post and Byron’s analysis, but Post suggests the answer may lie in the tendency of women to be more in tune with relationships. “(Women) think about themselves usually in relation to others. Whereas men – either born or developed – see themselves more independently, as standing apart from others. For individuals who see themselves as more connected to others, it becomes natural to think about the implications for others.”

Another factor at play on company boards is background. Women who reach the upper echelon of corporate governance tend to have achieved a higher level of education, says Post, which translates to a greater perspective on social responsibility. In decision-making, women tend to be more inclusive and ask more questions.

Using an inclusive style of decision making and information-gathering, women also tend to be more prepared. The need to be as prepped as possible, Post suggests, could be fueled in part by feelings that, as women, their qualifications are in question. That preparedness has an effect on men, funnily enough. Says post: “When women participate on boards, the attendance of male directors goes up too. There might be some type of contagion effect where if women come better prepared, then everybody starts preparing better. That can help in making better decisions overall.”

One major misconception that Post and Byron discovered is the assertion that diversity directly leads to a boost in company performance. The reality is a touch more complex; other conditions need to be in place. Post explains: “One of the conditions that enables diversity to lead to higher performance is when you hold a group accountable for their performance.”

In corporate environments like the United States, shareholders have greater access to the goings-on within a board and can take legal action if they fear their best interests are not being tended to. In some other nations – or simply any company not comfortable embracing diversity – those types of checks are not as strong and corporate governing bodies may not feel as much pressure to allow diversity to take hold or, if it does, allow it to make a difference. “You need to have processes where the board is going to actively seek input and consider people’s perspectives.” Only then can the positive impact of women in leadership positions be realized.

If you'd like to learn more about female leadership from a seasoned professional, complete the form below.

Give Your Company a Financial Health Checkup Now

Defining Opportunities For The Future: Healthcare

Defining Opportunities For The Future: Manufacturing